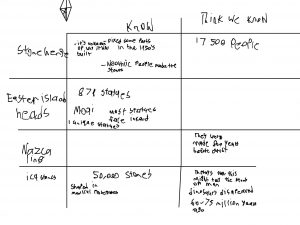 Some of the more interesting and oldest monuments of all time include The Stone Henge, The Moai Heads and The Nasca Lines. I think the reason why they are most studied is because there is no direct answer simple enough to explain the origin and purpose of all three of them. We all want answers about our own history to unravel things such as our true purpose or to discover the greater picture of humanity. Even if the answer itself was as simple as not having a reason. My personal favourite has to be the Moai Heads. Simply of their independence from the rest of the world. This small fracture of history that use to be full of thriving people. It’s just so fascinating to wonder what they were used for. The Stone Henge is a very interesting one as well. Because there appeared to be so much effort to be put into it, since each one of those stone blocks would way enormously. So what was the purpose of something with such great of an effort. It’s a structure so abstract yet so simple. A circle made of stones.

I like Enders Game so far. Although, I can say that it’s very similar in many other books I’ve read in terms of its plot. Such as, The Hunger Games, The Maze Runner and Divergent. Here is the plot based on what I have read thus far. Ender is a genius and is gifted with being more intelligent than some of his classmates. It’s unknown why this is but it can be guessed through the altnernate lines of dialogue at the beginning of each chapter. But Ender is not only a genius, he is also a war expert. He can come up with complex war strategy’s in his head to determine the outcome of certain events. He uses this talent against bully’s at school. This vital brute force is duly noted by whoever is watching him. Ender is then introduced to General Graff, an Ex Military

Marine who is now focused on a program known as battle school. A program that is filled with kids just like Ender who are being trained to fight unknown forces that threat Earth itself. Its definitely very epic in a way and finds a way to not sound generic. Although the only thing I’m not happy with thus far in this book is that it has a dinamic subplot with these kids that like to bully Ender. It’s not the bullying part that upsets me. It’s the fact that this plot has been done a million times, and it’s been done much better. I also think there are many more scenarios that could unfold in a situation like this. But maybe I will find that out later

Samuel Robert Thomson was born in 1929 during The Great Depression. Sam had a mental development at a young age and quickly learned the mysterious ways of time travel. Sam began to explore the universe and its wonders, and by age ten he had already known everything there was to know about universe. Of course when Sam became a much higher being, he had no other choice but to go into suclution in the mountains living the rest of his days as a hermit. he had spent the last hundred years studying the mysterious ways of baking cakes. And while in that hundred years he had discovered that cake was actually very deadly to its consumer. Sam immediately went public with this new information and caused a series of events that would eventually outlaw cake as a drug. It was dark time in Sam’s life (yes even more than The Great Depression), but he held strongly. To this very day Sam lives in infimy. Holding knowledge beyond our comprehension. Maybe one day we will know soon enough

Welcome to the part two of Section B. What I had to do was make a concept map for the ten themes in the movie. We had to evidence and examples we found throughout the film. They also all had to connect in one way or another. There’s a hyper link to get the full image at the bottom of the page. 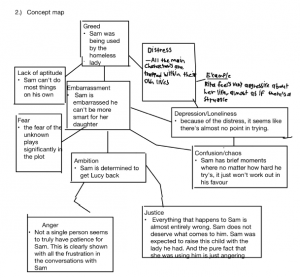 For Section B I actually did two projects and this is only the first half. For this part, we had to come up with four songs that matched the same tone of the movie. In terms of the lyrics and overall message. Here’s mine:

I.) “Strawberry Fields Forever” – The Beatles
Having it already in the actual movie was a good choice. The song is supposed to make people feel very enlightened and happy, and it would make sense to have that song playing when Sam and Lucy are together. It also goes well with Sam’s obsession with the Beatles, since the Beatles were probably a revelation for Sam.

II.) “Elderly Woman Behind a Counter in a Small Town” – Pearl jam
This song wasn’t in the movie, but ironically one of their other songs was. The song is about an elderly woman that has trouble remembering things. And then one day when she’s working and she sees a man that she had recognized for the first time in years, but is too embarrassed to say anything. And opportunity is taken away from her. I think this song would fit perfectly when Sam is finally reunited with Lucy after the struggle of just getting to see her. Or possibly when he misses an opportunity to get her back but realizes that she needs better care.

III.) “Somebody to Love” – Queen
The song has a lot of lyrics that relate to this movie. “I work hard, every day of my life”. “Can anybody find me, Somebody to love”. These lines could relate to how Sam is constantly fighting for his Daughter. And Sam loves his daughter more then everything and it was probably what he was missing before when he was alone. Thus he needed somebody to love.

IV.) “Tiny Dancer” – Elton John
The song has a light delicacy and some what tragic theme. Almost as an end result to what we can interpret in the movie. Lines like “Hold me closer” show that there’s some gradual distance between who Elton john was talking about. With the theme of distance in the song, it can almost be interrupted through Sam’s vision. Sam has distance from a lot of people. He lives alone. His father abandoned him. The only stable friend Sam has is the lady that lives in the apartment next to him.

For the first part of this project we were told to choose two Charcters of our choice and explore their fears from our perspective based on our observations from the movie. We could go as in depth as we wanted as long as we were clear. And here’s mine:

I believe that Sam has an irrational fear of being alone. It doesn’t display this fear clearly in the film, but rather subtly. It brings up moments of Sam’s past like, how his father abandoned him or his concern for both Lucy and Rita. Also events from the movie plus the overall arching theme. It’s hard to be so different from everybody and it can be really isolating

I believe Lucy fears of Sam’s life. As she got older, she was starting to realize that Sam was much different then everyone else. She didn’t want to embarrass him because he was a full grown man. She might have wondered what would have happened to him if she wasn’t born. I also think it works the same way around in terms of Sam’s fear of losing Lucy. Telling from Sam’s state, he didn’t grow up in the best of conditions and he would probably want to provide something that he never got the opportunity for, like college or a well paying job.

I think the movie was very powerful and emotional, hidden with a bunch of symbolic messages. The way the camera is proceeded seems although its told from his perspective. He can see differently then everyone else does. Sam is treated poorly by just about everyone he meets. including his own daughter. This girl means more to him then his own life. When he finds out his daughter told everyone that she was adopted, Sam is genuinely crushed. He wants to give her the life he never had and will do anything get keep her close. I especially loved how they chose to have The Beatles as Sam’s obsession. It obviously reminds him of a time when he didn’t have to worry about the riggers of the real world. So he likes to compare real life scenarios to The Beatles to help him remember things. I felt as though I am Sam couldn’t of used the extra disabled people though. I think if you took that out of the equation it would have added to Sam’s helpless’s and maybe he could meet these people in the end. That way we get a much more satisfying ending where Sam gets a proper family and a variety of friends in his life.  a few questions come to me at the end of this film. I understand the type of ending where you have to interpret it for yourself. But however, the whole film was leading up to the point where were about finally have Lucy back, and it takes away my good feeling. After the whole emotional roller coaster, we never get the outcome of Sam’s actions. I would have at least liked to have seen how Lucy’s life turned out. Did Lucy do well in school?,  does Sam ever get a better job?. I just would have liked to have something with greater meaning. But other then that I give this movie a 10/10

I took a risk and tried writing a new kind of poem. This is my audio reflection of that process.

You might be surprised to learn you have a blog. And you’ll soon have some of your work on it already. That’s how simple it is to blog! Crazy, huh?

You’re starting with me in Grade 9, so over the next four years as you continue to add work and examples of your writing / speaking to this blog, you’ll have quite a collection to reflect back on at the end of Grade 12. That’s how you’ll recognize how much you’ve grown in your communication abilities, by comparing the early work to what you’re capable of before graduation.

I hope you embrace this blogging task and experiment with developing a writer’s voice for yourself and enjoy the feedback you can give and receive from your peers. Who knows where this will